When we spoke on January 25, I noted that a major drugmaker just made a huge cannabis merger. to fill out its franchise of cutting-edge medical science. Today, I'm following up to let you know about another big cannabis breakthrough - it just...

The market has led us on a wild ride this year. It dropped over 35% in February and March, and in only a matter of months, some indices were already hitting all-time highs again. Just look at the Nasdaq Composite, which is up 40% this year, even with the drop.

But the most interesting moves in the market this year have been from private companies entering the public markets. 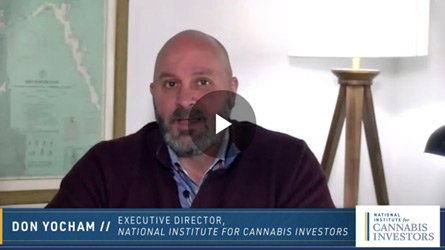 One billion dollars in annual sales.

It’s a milestone for a public company that signifies it’s a winner.

Customers will pay anything to use their products and services.

The competition shakes in its boots, realizing it has fallen behind and may never catch up.

Cannabis companies have just found a backdoor strategy to go public and place their shares right into your hands.

What they’re doing is forming a special-purpose acquisition company (SPAC), also known as a “blank check” company. Through a SPAC, some of the smartest people in any room – lawyers, finance wizards, and startup founders – raise money through an IPO. They will then use that money to buy a company or several companies.

There’s a little bit of catch with this because you won’t know what the SPAC is going to buy until it makes an acquisition. It won’t list any specifics in its paperwork.

When we last spoke yesterday, I told you that my friends and Colleagues over at the National Institute for Cannabis Investors were preparing a special event for you.

They are planning to share their three core principles for avoiding the hype and finding solid cannabis investing opportunities.

But now, I have some even more exciting news. The Institute has teamed up with a special guest, legendary quarterback Joe Montana to bring the 2020 American Cannabis Summit directly to you.

Some kind of legal marijuana is available to purchase right now throughout most of North America, but the majority of cannabis sales are still taking place underground.

My friends and colleagues at the National Institute for Cannabis Investors are right to emphasize this point because it shows the massive profit opportunity that is ahead as illicit sales turn into legal sales and, ultimately, profits for publicly traded companies.

In 2018, New Frontier Data projected that there was over $86 billion in cannabis sales in North America. As a reference point, only $10.8 billion of that was legal.

To make a dent in the illegal markets, you need two things. One is education. When more people learn about why it’s better to turn to safe, regulated, and legal markets, you send cannabis consumers to dispensaries instead of dark alleys.

If you’ve followed along with me for even a short time, then you already know that I have a tendency to make bold predictions.

Here’s the thing. I’m convinced – and I have the track record to prove it – that to consistently crush the market, you have to be willing to buck the in-crowd on Wall Street and in Washington.

For me, it’s all about innovation. I always say that the road to wealth is paved with tech, and that’s why I’m always excited about bold new sectors that mainstream big investors might still be cautious about. I expect that 2020 is going to be an outstanding year for Bitcoin and other cryptocurrencies. Along with that, I’m expecting big things from the legal cannabis sector in this coming year.

But let’s be honest, it’s gotten much more difficult to cash in on cannabis because the sector is out of favor.With that in mind, let’s take a look at the situation facing the cannabis sector as we move into 2020…

BARCELONA, Spain – Most folks visiting this historic port city on the Balearic sea would focus on seeing tourist-facing sites like the huge and elaborate Sagrada Familia church or the Gothic district.

But I made finding a cannabis club a very high priority.

And this was for two reasons:

I’m happy to report that cannabis use and sales are on the upswing in this port city and that Europe is set to help drive a global market forecast to hit $15 billion this year.

Today, I’m going to reveal to you what my visit to just such a club reveals about the opportunities available in this high-octane sector…

My daughters, ages 20 and 23, are a little bit bummed right now.

See, one of their favorite retail stores has just filed for bankruptcy protection. As a result, Forever 21 intends to close 178 stores in the U.S. and another 172 around the world.

Kendall and Jordan have been going to one of the local stores for many years. They like the wide selection of trendy clothes, shoes, and accessories at discount prices.

Here’s the thing: their other favorite place to shop continues to put lagging retailers under pressure to perform in the fast moving online world.

Growing up in a tech-centric home, both my daughters take shopping at Amazon.com Inc. (AMZN) as a given. Much to their dad’s chagrin, they do it all the time – and I do mean all the time.

But what most people miss here is that Amazon now relies on thousands of other companies to sell through the firm’s unbeatable storefront.

According to Statista, Amazon’s websites receive 209.7 million unique visitors every month from the U.S. alone, with most of the purchases they make coming from third-party sellers.

With that in mind, I want to show you why what I call Amazon’s “Hidden Supercharger” is set to crush the market…