For the first time in decades, many North Atlantic Treaty Organization (NATO) allies are set to increase military spending.

Now, there’s no doubt the United States’ spending will continue to constitute the lion’s share of the roughly $1 trillion in combined annual spending by NATO allies.

But this time, of course, war is raging in Ukraine on several of NATO’s borders. Little wonder why several NATO members and other regional militaries are stepping up spending on weapons procurement (I’ll have more about that in a moment).

But suffice it to say militaries both in NATO and without are urgently modernizing and re-arming.

Several U.S. and global companies are uniquely positioned to benefit from this spending, and I’ve found a direct way to play all of them. These shares are trouncing the S&P 500 right now, too, up 7.3% year-to-date against an 8.8% loss on the big index.

The West Is Looking for Air Dominance

In any modern war, an air force needs to be able to “own” the skies over the battlefield. The airspace over Ukraine is still hotly contested, more than one month into the war.

NATO and European countries watching the war unfold in their own backyard are taking no chances, so aerospace constitutes a huge chunk of this increased spending.

Canada, for instance, is looking to replace its Boeing CF-18 “Hornet” fighters. The Royal Canadian Air Force is close to inking a deal for around $15 billion worth of Lockheed Martin Corp. (LMT) F-35 “Lightning” planes.

The German air force is buying 35 Lighting aircraft, and the United Kingdom’s Royal Air Force is on track to purchase 47 of them.

And here in the U.S., the White House is asking Congress to approve $813 billion for military spending in fiscal year 2023, which begins October 1. That amounts to a roughly 4% increase from the $782 billion enacted for this fiscal year. The Department of the Air Force has requested some $194 billion of that, 11.7% more than fiscal 2022.

Beyond NATO, European countries are beefing up their air fighter capabilities with the F-35, as well. Finland, which borders Russia and is now actively debating signing onto the NATO treaty, is spending $9.5 billion on 64 units of the Lightning.

Even historically neutral Switzerland is shelling out $5.5 billion for the Lockheed jets.

Aerospace spending is only part of the picture, of course. Countries are looking to boost their capabilities in other ways, too. Switzerland is set to spend another $2.1 billion on Patriot surface-to-air (SAM) missile batteries, and many other countries are looking to stock up on Raytheon Technologies Corp.‘s (RTX) formidable Javelin antitank missile system.

There are other upgrades planned, too numerous to mention, but as I said earlier, there’s one stock to leverage them all.

Here’s the Best Way to Play This Trend

Investors would do well to take a good look at the PowerShares Aerospace & Defense Invesco ETF (PPA). This is a cost-effective ETF made up of proven defense and aerospace leaders.

The beauty of this ETF is that it positions you to profit from just about every corner of the industry. With nearly 50 stocks in its portfolio, PPA includes aircraft makers, component suppliers, electronics and materials firms, and much, much more.

While defense giants are a big part of the portfolio, we get exposure to smaller firms as well. Large caps make up roughly 45% of the holdings with small and mid-caps accounting for the rest of the portfolio.

Thus, PPA puts you into position to profit on defense plans from D.C. to Brussels and far beyond. I’m talking about such firms as:

As you can see, with this one investment, we benefit from the entire sector’s growth. That also reduces the risk associated with investing in just one stock at a time when the markets remain volatile.

Thus, I believe PPA is and cost-effective way to invest in virtually every aspect of the coming defense boom.

This helps explain why it has recently been such a strong performer of late. 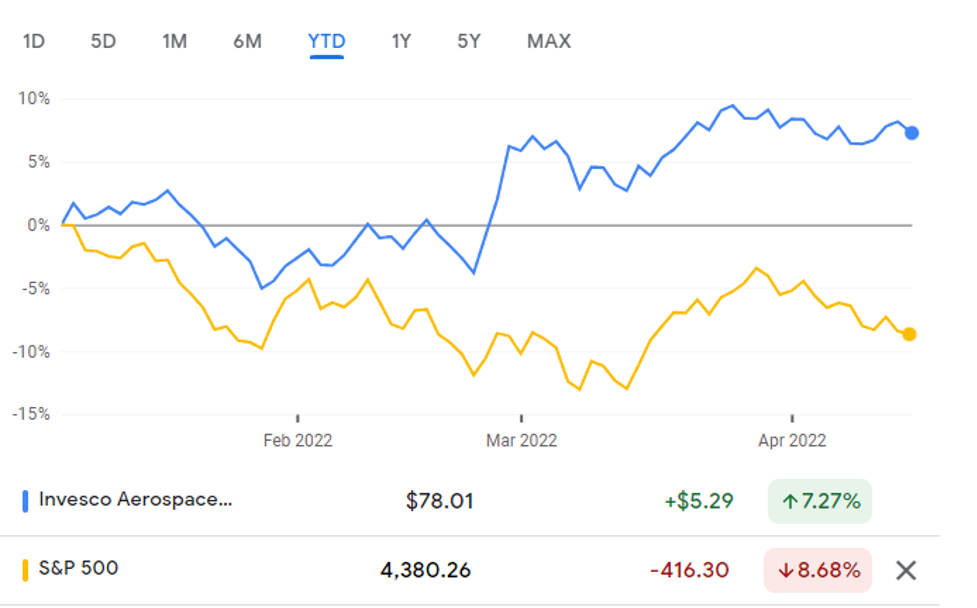 In other words, this is the kind of foundational play that lowers your risk of buying individual stocks while at the time really building your net worth. It’s a great place to start, too, in a market that’s sluggish in many other sectors.

Of course, in any market, there are always going to be standouts. One of my favorites right now is actually cryptocurrency – smaller cryptos, that is. Many of the bigger coins are down right now, but two smaller coins, a smart contract token, and a “cash substitute,” could soar 5,044% and 5,311% within five years. Details on those here.