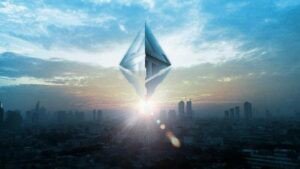 The surge has put the Ethereum price at about $3,500. What cryptocurrency investors want to know is what’s causing this incredible rally – and more importantly, if it can be sustained long enough to carry the price to $10,000.

Ethereum is definitely having a moment. After years of mostly following Bitcoin’s price action, the price of Ethereum has started to move more independently. Over the past year, the correlation coefficient has dropped from 0.9 to 0.7.

This tells us the market is recognizing that the investment case for Ethereum is distinct from that of Bitcoin and needs to be valued on its own merits.

And it makes sense. While Bitcoin is thought of as a store of value similar to gold, Ethereum has evolved into a platform that supports billions of dollars’ worth of economic activity.

These trends are the core reason for Ethereum’s impressive rally and are key catalysts that will propel the Ethereum price to $10,000 and beyond.

Why the Ethereum Price Is Soaring

To understand how Ethereum became the focal point of the hottest trends in crypto, you have to know why this cryptocurrency was created.

The creators of Ethereum, led by wunderkind Vitalik Buterin, sought to make a cryptocurrency that could do more than Bitcoin could.

In particular, it means Ethereum can execute “smart contracts.” These are similar to real-world contracts, except the conditions are written in software. The contract executes when the conditions set forth in the contract, using data from a trusted online source called an oracle.

This seemingly simple idea is the foundation of almost everything that has been built on the Ethereum platform. More than anything else, it’s what makes Ethereum valuable.

“What really changed everything was smart contracts,” billionaire investor Mark Cuban said in a March 25 interview with The Delphi Podcast. “Smart contracts came along, and that created DeFi and NFTs. That’s what changed the game. That’s what got me excited. That’s why it’s a lot like the Internet.” Cuban made his fortune by selling an Internet-based company he co-founded, Broadcast.com, to Yahoo in 1999.

Over the past year, money has poured into projects built on Ethereum, particularly DeFi.

DeFi is a term that describes the use of smart contracts, decentralized exchanges, and special-purpose tokens people are using to perform financial transactions such as borrowing and lending.

According to CoinGecko, the total value of financial services associated with DeFi has grown to $140 billion. That may not sound like much compared to the tens of trillions of dollars of value in the global banking system, but DeFi is growing at an exponential rate.

Ethereum’s other growth engine, NFTs, has seen a similar rise – most of it concentrated in activity this year. According to the website NonFungible, the value of NFT sales on the Ethereum network rocketed from $94 million in the last quarter of 2020 to $2 billion in the first quarter of 2021.

Fueled by NFTs and DeFi, the total value of all transactions on the Ethereum platform was $1.5 trillion in the first quarter – a sum higher than the seven previous quarters combined.

But in some ways, Ethereum has become a victim of its own success. And that presents some possible headwinds…

The Ethereum network was never designed to handle the volume of transactions that have resulted from all that has been built on it.

Like many crypto networks, Ethereum has fees to reward miners and ensure that “spam” transactions are too expensive to be worthwhile. But the traffic overload has caused fees to skyrocket.

A year ago, it cost about $0.20 to make a transaction on the Ethereum network. In February, fees spiked to nearly $40 per transaction. They’ve fallen since, but lately have hovered in the $10 to $15 range.

That’s still very high for smaller transactions of less than $1,000.

Ethereum also suffers from capacity and speed issues. It’s straining under the weight of all the innovations its smart contract design enabled.

That opens the possibility to so-called “Ethereum killers” coming in to steal market share in the smart contract platform category.

And there’s no shortage of contenders: Binance Smart Chain (BSC), Polkadot, Algorand, and Solana, just to name a few. And some projects have either moved to one of these alternatives or have elected to build on them instead of Ethereum.

But Eloisa Marchesoni, an expert in tokenomics (the analysis of the long-term prospects of a crypto project) who consults on crypto projects, thinks it’s unlikely Ethereum will surrender its dominant position anytime soon.

“It’s just not going to happen,” Marchesoni told me. “If nothing else, Ethereum has first-mover advantage. And there’s no way you can surpass it. The community of developers is just so extensive.”

Meanwhile, each of the contenders also has challenges to overcome.

“BSC is just too similar to a centralized ecosystem,” Marchesoni said. “People are using it because of the Binance brand. But if [Binance CEO] Changpeng Zhao makes one bad move, everything collapses. It’s not based on anything else. Polkadot is good, but it’s just one of the many. Why Polkadot and not one of the others?”

With so many rivals, it will be hard for one to gain enough traction to supplant Ethereum.

Plus, Ethereum is not standing still.

Why an Ethereum Price Prediction of $10,000 Makes Sense

The developers know of Ethereum’s bottlenecks, and plans have been underway for some time to fix them.

That would be Ethereum 2.0, which will change the security protocol from proof of work to proof of stake and introduce several changes that will relieve congestion and speed up the network. Once fully implemented, Ethereum 2.0 will increase the network’s capacity to process transactions from the 30 per second it does now to 100,000 per second.

While this upgrade has taken much longer than expected, it is moving forward in phases. Ethereum 2.0 is in the first of three phases now, with the last phase expected in 2022.

Knowing this upgrade is coming, developers will be less eager to abandon the Ethereum platform for one of the less-used alternatives.

In truth, Ethereum’s dominance of the smart contract platform space has created powerful network effects. The Ethereum community has built up tons of tools and infrastructure that competing platforms simply can’t match.

Plus, the Ethereum network has held up remarkably well despite the heavy load it carries.

In the context of an Ethereum price prediction of $10,000 by the end of this year, it becomes clear that these advantages will continue to draw users as well as developers to the platform.

The kicker, of course, is the transition to Ethereum 2.0. The closer the final upgrade gets, the more excitement will build – and the higher the price of Ethereum will go.

And it stands to reason that as Ethereum 2.0 continues to attract economic activity to the platform, the Ethereum price will keep moving up.

The Digital Gold Rush of the 21st Century

They’re much smaller and more affordable than Bitcoin, with up to 10X the growth potential as Dogecoin in the coming years.

To learn about all three – and discover how even a small stake could transform into a small fortune in 2021 – click here.

Cryptocurrency is Going Mainstream – Here’s What Investors Should Do