Larry Ellison does nothing quietly.

This is a guy who instead of retiring to a Hawaiian island bought one.

And when the longtime Oracle Corp. (NasdaqGS: ORCL) CEO stepped down Sept. 18, it took not one but two new chief executives to replace him.

The media treated it as if a pope were retiring – or maybe Derek Jeter.

But really, besides the double-headed CEO thing, this was hardly news.

With more than half a dozen disruptive tech trends hitting Silicon Valley all at once, a quiet revolution is sweeping the top ranks of tech’s biggest and most powerful companies.

And today I’m going to show you how to invest in the 11 members (remember: Oracle takes up two slots) of this New Guard all at once for a price well below what many of these stocks cost.

This one investment has already thrashed the overall market by 46.5% so far this year.

Now let me tell you all about it…

Out With the Old…

In my 30-plus years knocking around Silicon Valley, I can’t remember a similar stretch of time with so many CEO changes.

Despite the huge pace of change in technology, Silicon Valley has long been home to a number of senior leaders who stayed at the top for many years.

Just look at Ellison, now 70. Since cofounding Oracle’s predecessor, Software Development Laboratories, in 1977, he had served as the company’s only CEO. That’s a nearly 37-year tenure, one that Bloomberg lists as the longest in the current tech industry.

At Microsoft Corp. (NasdaqGS: MSFT), there were only two CEOs for most of the company’s history – founder Bill Gates for 25 years followed by Steve Ballmer for 14 more.

Thus, until recently, Silicon Valley has placed a high priority on having stable leadership. That’s because it’s nearly impossible to find executives who have all the unique skills required to run far-flung global tech enterprises.

So a top tech company’s board often must extend the CEO a long-term contract that includes a hefty amount of stock options. So, both the board and the chief executive have every incentive to lock each other up for many years.

But that dynamic is changing as the tech landscape shifts rapidly. In just the past five years, we’ve seen the rapid rise of Big Data and the Internet of Everything as well as mobile and cloud computing.

These companies need great leaders who can adapt to the lightning-fast pace of change all around them. And that’s why we pay so much attention to tech leadership.

At Strategic Tech Investor, we have a five-part system for investing in tech to put us on the road to wealth. Rule No. 1 states that “Great companies have great operations” – and that usually starts with leadership.

… And in With the New 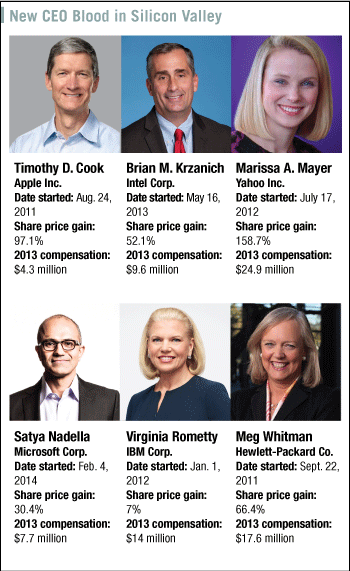 Our job now is to profit from the rise of this new generation of Silicon Valley leaders.

These men and women are change agents who have brought in to improve their companies’ operations, cash flow and profits.

Thus, the arrival of a new CEO can serve as an explosive catalyst for a stock’s share price.

You’d think we can’t invest in all 10 of these global tech stocks with new leaders at once.

But you’d be wrong.

Of the top 20 holdings of Technology Select Sector SPDR (NYSEArca: XLK), the New Guard we’ve been talking about takes up half of those slots.

And for our purposes this is an excellent way to invest in Silicon Valley’s changing of the old guard.

Let’s take a look at three XLK holdings with newly installed CEOs that are helping this ETF crush the overall market.

Yahoo was one of the great plays of the early Internet age and still counts some 800 million regular users. But growth had slowed significantly. Much worse for investors, shares had remained in a downtrend for years.

However, since leaving Google Inc. (NasdaqGS: GOOG) to take the top spot at Yahoo in July 2012, Marissa A. Mayer has had a huge impact on the company’s stock.

Mayer quickly set about revamping operations and looking for new strategic acquisitions. For instance, last year she paid $1.1 billion for the micro-blogging site Tumblr as a way to generate more traffic for Yahoo.

While Yahoo is still in turnaround phase, Mayer has been great for shareholders. Since becoming CEO, the stock is up nearly 160%. Over that same period, the S&P 500 is up just 48%.

Brian M. Krzanich became CEO of Intel in May 2013 and has been coming on strong. He’s quickly made up the ground Intel lost by missing the early stages of the mobile revolution.

In mid-July, the chip legend revealed it had shipped a record number of products in this year’s second quarter. That included 10 million tablet semiconductors in the period, one-fourth of Krzanich’s goal of 40 million a year.

Also in the period, Intel posted a 40% jump in profit from a year ago. Since Krzanich was named CEO, Intel has rallied for gains of roughly 42%. Those returns are nearly twice the S&P’s over the same period.

Satya Nadella is only the third CEO in Microsoft’s history. And he’s been off to a great start since assuming the role in February.

The new CEO recently cut the company workforce by 18,000, a 14% cut that is the largest in the company’s history. But he’s using mergers to produce new rounds of growth beyond PC software.

Wall Street is a fan. Since Nadella became CEO – less than a year ago – the stock is up 29%, compared to a 14% move in the overall market.

Besides the six CEOs represented in the graph above, the rest of Silicon Valley’s New Guard whom you’ll find in XLK are Safra A. Catz and Mark V. Hurd at Oracle; Lowell C. McAdam at Verizon Communications Inc. (NYSE: VZ); Steven M. Mollenkopf at Qualcomm; and Larry Page at Google.

XLK is benefitting from all these leadership changes. Over the past year, XLK has returned 25%, which is 25% better than the S&P 500.

And again, Technology Select Sector SPDR is a bargain when compared to its holdings. It trades at about $40, much less expensive than most of its top 20 holdings.

I didn’t mention Timothy D. Cook in today’s column, but XLD is a great way to invest in Apple Inc. (Nasdaq: AAPL) via an ETF. The iDevice company makes up about 16% of XLK’s “weight.”

This is a great foundational investment that gives you cost-effective access to some of the world’s top technology firms. It’s an ETF you can hold for the long haul.

And it doesn’t take many investments like Technology Select Sector SPDR to give your portfolio a solid tech base from which you can build true wealth.